Investigation of Cylindrin as a Candidate Structure for Toxic Amyloid Oligomers 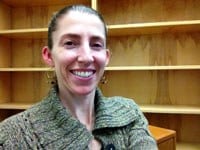 In my work, I hope to clarify the nature of the causative molecular agent of Alzheimer’s and related diseases. Alzheimer’s is one of several diseases that seem to be caused by small, soluble clusters of protein called ‘amyloid oligomers.’ Alzheimer’s can potentially be treated by blocking the toxicity of the amyloid oligomers. However, designing such an inhibitory drug requires a detailed understanding of the atomic structure and properties of amyloid oligomers.

By studying these protein regions in isolation, we can see if they too behave like amyloid oligomers: Do they cluster? Do they kill cells? Do they form a similar structure? When we observe the structure of a disease-related amyloid oligomer, even if it is formed from only part of the disease protein, we can begin to design compounds to block its toxic action.