The Role of GLIS3 on Human β Cell Development and Dysfunction 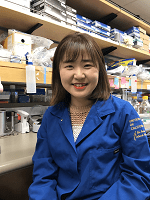 Despite distinct etiologies, β cells in both type 1 diabetes (T1D) and type 2 diabetes (T2D) are known to be susceptible to common stress factors, such as glucotoxicity, oxidative stress, and the unfolded protein response. Notably, GLIS3 zinc-finger transcription factor has been identified as one of the few common risk variants between both T1D and T2D from genome-wide association studies (GWAS). In this proposal, I aim to address the functional role of GLIS3 in human β cells. Using bona fide mature β cells, which were differentiated from human embryonic stem cells (hESCs), I will first investigate the role of GLIS3 in regulating human β cell development and the requirement of GLIS3 on β cell function and survival. I will then seek to determine the function of a non-coding region of GLIS3, located between its first and second exon, which harbors a cluster of genetic variants found in T1D and T2D. Given that this non-coding region is adjacent to a segment of euchromatin, I hypothesize that it functions as a putative enhancer of GLIS3, providing a mechanism by which genetic variants within this region may disturb expression of GLIS3 and make β cells more sensitive to insults such as metabolic stress.

In summary, the overarching goal of this proposal is to gain insight into the role of GLIS3 in human β cell biology, including development, function, and survival, and to investigate how genetic variants of GLIS3 may contribute to β cell dysfunction and diabetes progression.