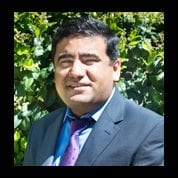 Aging has been largely thought of as a manifestation of metabolic malfunctions and physical and psychological changes accumulating over time. Research has shown that changing epigenetic landscape of individual cells is major contributor to the process of aging (aka “cellular aging”). INK4/ARF locus on chromosomal region 9p21 has been implicated extensively in aging, diabetes, heart diseases and multiple forms of cancer; making it an ideal model to study mechanisms of cellular aging. 9p21 region harbors multiple genes (p14, p16 etc.) that contribute to the decline in replicative potential of self-renewing cells during aging and the epigenetic events at this locus are likely to be key components of the aging process. In this study, I have identified multiple long non-coding regions (viz. enhancers) that contribute towards maintenance of architecture of the locus and its transcriptional regulation. Using high-throughput sequencing techniques and CRISPR (Clustered Regularly Interspaced Short Palindromic Repeats) strategies, I have discovered an intricate network of interplay between the key enhancers in the locus. I elucidated that enhancers loop with INK4/ARF locus and regulate expression of ANRIL, p14 and p16: important determinants of cellular aging. Interestingly, this is a local effect, suggesting that multiple such “regulator domains” might be at work in the genome; to check the cellular aging. The findings of this proposal are significant because a better understanding of regulation of this locus could provide therapeutic targets to impede the aging process and development of diseases associated with aging, such as coronary artery disease, diabetes, and neuro-degenerative disease.