Exploring a Role of HSP90 in Neuroprotection of Axonal Function 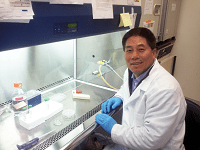 Unlike cells in other tissues/organs, neurons in the brain are long-live cells that do not regenerate easily to replace damaged or lost neurons. Neurons also have long processes that are used to communicate and exchange materials/information with other neurons and their target(s). All these special features make neurons particularly vulnerable to stress and other insults that damage proteins leading to toxicity to neurons.

Accumulation of damaged proteins has been identified as the culprit for many neurodegenerative diseases such as Alzheimer’s disease (AD). Fortunately, the cells have evolved an elaborated self-defense system against damage proteins called “heat shock response” to prevent/minimize toxicity. The heat shock proteins (HSPs) are dominant players in such response. HSP90 is by far the most important one and is the most potent defender of neuronal function.

The goal of our proposal is to test if drugs that enhance HSP90 function can be potentially used for treating neurodegenerative diseases such as AD, a disease largely due to excessive deposition in the brain of the very toxic β-amyloid peptides (Aβ).

We suspect that Aβ causes damages to neuron’s long processes and will have devastating consequences to neuronal function due to their extreme length and their functional importance.

Ultimately, our focus is to investigate if and how HSP90-enhancing compounds alleviate Aβ toxicity on neuron’s processes and rescue neuronal function. Results from our studies will show that HPS90 may serve as an important drug target for AD treatment.