The Impact of Endocytic Tom1 on Alzheimer’s Disease 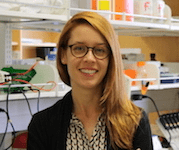 Inflammation is a fundamental protective response, but if it becomes dysregulated, it can be a major cofactor in the pathogenesis of many chronic human diseases, including Alzheimer’s disease (AD). Previous studies demonstrated that chronic inflammation mediated trough interleukin-1β (IL-1β) and its receptor IL1-R1, an important inflammatory mediator, represents a key mechanism by which Aβ drives the development of tau pathology and cognitive decline in AD. Notably, the potent pro-inflammatory activities of IL-1β are regulated at three levels-synthesis and release, activation/degradation of the membrane receptor, and intracellular signal transduction. All of these processes are tightly controlled to ensure proper activation and resolution of immune responses. The disruption of these processes may cause excessive production of IL-1β and expression of IL-1R1, which in turn exacerbates inflammatory responses. There is strong evidence showing high levels of IL-1β in the brain of AD patients. Notably, defects in protein clearance and trafficking are also commonly found in AD, however, the underlying mechanisms by which Aβ modulates IL-1β signaling remain unknown. Toward this end, we developed transgenic mouse models and adeno-associated virus approaches to enable us to dissect the molecular pathways by which Aβ, IL-1β and tau interact and the mechanisms by which they adversely impact cognition during different stages of the disease process. The translational impact of this work is substantial and significant, as these studies will uncover new therapeutic targets for the treatment of AD.